With passports in hand and suitcases in tow, two groups of students from the College of Agriculture and Life Sciences boarded planes to study abroad during Iowa State University’s fall break. These faculty-led programs to Costa Rica and the United Arab Emirates provided students opportunities to witness international agriculture and develop a global perspective of the industry. 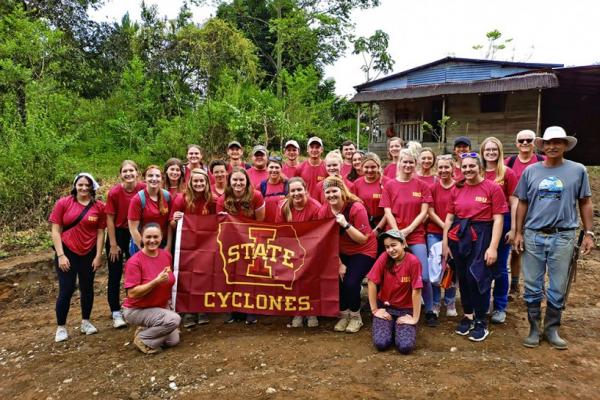 The group of students in Costa Rica traveled to many kinds of farms to understand the soil properties, crop production and water usage in various parts of the country. Image courtesy of Blake Van Der Kamp, sophomore in agricultural and life sciences education

The first group traveled to Costa Rica on a trip directed by Lee Burras, Morrill Professor in agronomy. Twenty-six students representing six different majors caught an early morning flight to the tropical country on Nov. 16. They spent the next 10 days visiting farms in various regions to learn about different kinds of crop production.

Students were acquainted with Costa Rica’s landscape on the first day of their trip by taking a guided tour through the forests surrounding the Miravalles volcano. Andisols, or mineral-rich soils formed in volcanic ash, make up a large portion of Costa Rica’s farmland. Understanding soil properties and the impact they have on plant growth was one of the main learning objectives of this program.

In the days to follow, the group toured a pineapple plantation, an organic vegetable farm, a coffee cooperative, and a highland fruit operation. At these stops, students learned about the growing seasons, harvesting practices, processing techniques and consumer demand for these crops.

During a visit to a pineapple plantation in Costa Rica, Iowa State students had the opportunity to plant trees in the owner's garden. The activity helped reinforce the plantation's mission of taking care of the environment throughout the stages of production. 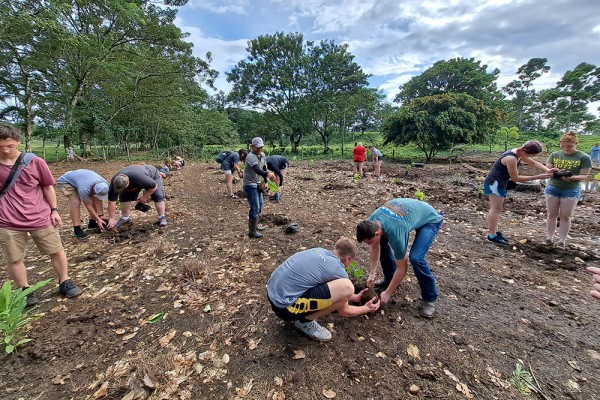 Nathan Behrends, junior in agricultural studies, said his favorite part of the trip was trekking up the side of a mountain to see avocado, peach and plum trees. While Behrends found it fascinating these crops thrive in the cooler temperatures nearly 2,000 meters above sea level, he was equally as inspired by the farmer’s life story.

“He had just graduated from a university before returning to the family farm with plans to take it over and make improvements so their business can be more successful,” Behrends said. “It was great to hear from him, and I got to see how challenging it can be to farm on mountain ranges by means of hand labor. It made me really appreciate the work these farmers do.”

During the second half of the trip, students visited a bamboo farm and learned about the wide array of products made from it. They also ventured to a palm oil plantation where the farmers grew cacao, peppercorn, vanilla, and many other spices.

One especially unique aspect of the Costa Rica trip was the day the group got to visit their tour guide’s farm in the southern part of the country. Even though this property was not currently being used for crop production, this stop gave students the chance to apply their knowledge of agronomy and determine what the best uses of this land could be.

“Gabby, our tour guide, has a farm she inherited from her father that she is trying to develop,” Behrends said. “We walked around, surveyed the landscape, and studied the soil. She gave us the soil sample analyses and we got to dive a little deeper into this data to come up with recommendations for her about the plants she could grow and how to fertilize them.”

This kind of work is something many students on the trip aspire to pursue in their careers. Behrends is among these future agronomists, and he is grateful traveling to Costa Rica broadened his worldview.

“The agricultural industry is so vast, and I think there is a lot to learn and gain from the way other countries do things,” Behrends said.

Culture and Economic Diversification in the United Arab Emirates 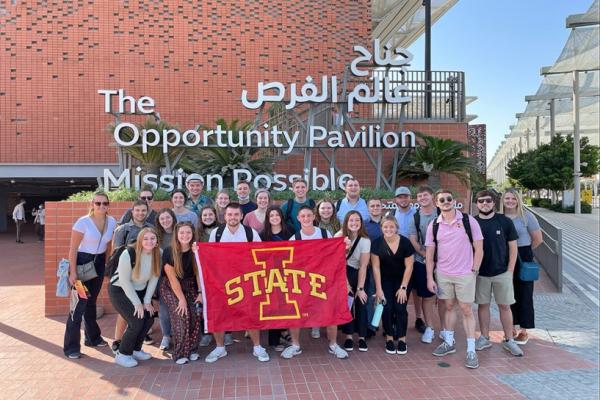 Students who traveled to the United Arab Emirates learned about international business and economics while immersing themselves in a diverse culture. Image courtesy of Brooke Beinhart, senior in agricultural business

The second group of students departed to Dubai on Nov. 18. This program was led by Ebby Luvaga and Amani Elobeid, professors in economics, and Jean-Pierre Taoutel, associate professor in world languages and cultures.

The United Arab Emirates has the second-largest economy in the Arab world, which readily attracts foreign investment. The goals of this trip were to introduce students to banking and financial institutions in the country and for them to understand how business and trade are impacted by cultural diversity.

Two locations students visited that captured aspects of cultural diversity were the Sheikh Zayed Grand Mosque and the Falcon Hospital in the capital city of Abu Dhabi. Brooke Beinhart, senior in agricultural business, said these tours were two of her favorite parts of the trip, and was especially amazed by the architecture of the mosque.

“The Grand Mosque left me absolutely breathless,” Beinhart said. “Every single aspect was built with so much detail that brought so much beauty to the structure.”

The following day, the group made their way to the 2020 Dubai Expo, which was postponed from last year due to COVID-19. Beinhart said this event lasts six months, from Oct. 1, 2021, through March 31, 2022. A total of 192 countries take part in it to showcase their commitment to better mobility, more opportunities, and focus on sustainability for the future.

Next, students traveled to the Jebel Ali Zone Area to learn about international trade and its significance to Dubai’s economy, as well as Ferrari World, home of the world’s fastest roller coaster. They also attended a virtual tour of the Dubai Islamic Bank.

Whitney Reever, senior in agricultural and life sciences education, said after the sun set on the sixth day the group got to experience a true Arabian night. Students left the city to go on a desert safari and took part in many cultural activities.

“We got to see what Dubai looks like outside of the skyscrapers and shiny cars,” Reever said. “We went on camel rides, got to watch a belly dancer, a fire dancer, tanoura (a common dance performed in the Middle East), and had an authentic dinner.”

The tail-end of the trip included stops at many tourist sites: Ski Dubai, the largest indoor ski resort; Burj Khalifa, the tallest building in the world; and the Dubai Mall. Students also visited a souq, or a traditional Arab street market, where anything from spices to fine jewelry is sold.

Upon returning to Iowa State, Beinhart and Reever agree this trip was the opportunity of a lifetime. They appreciated learning about international business and economics, making connections between a diverse culture and their own.

“After traveling to the United Arab Emirates, I’ve definitely gained insight that will help shape my career as I move forward,” Beinhart said. “This experience opened my eyes to the world around me and helped me realize no matter where I am, we are all people with many of the same values.”